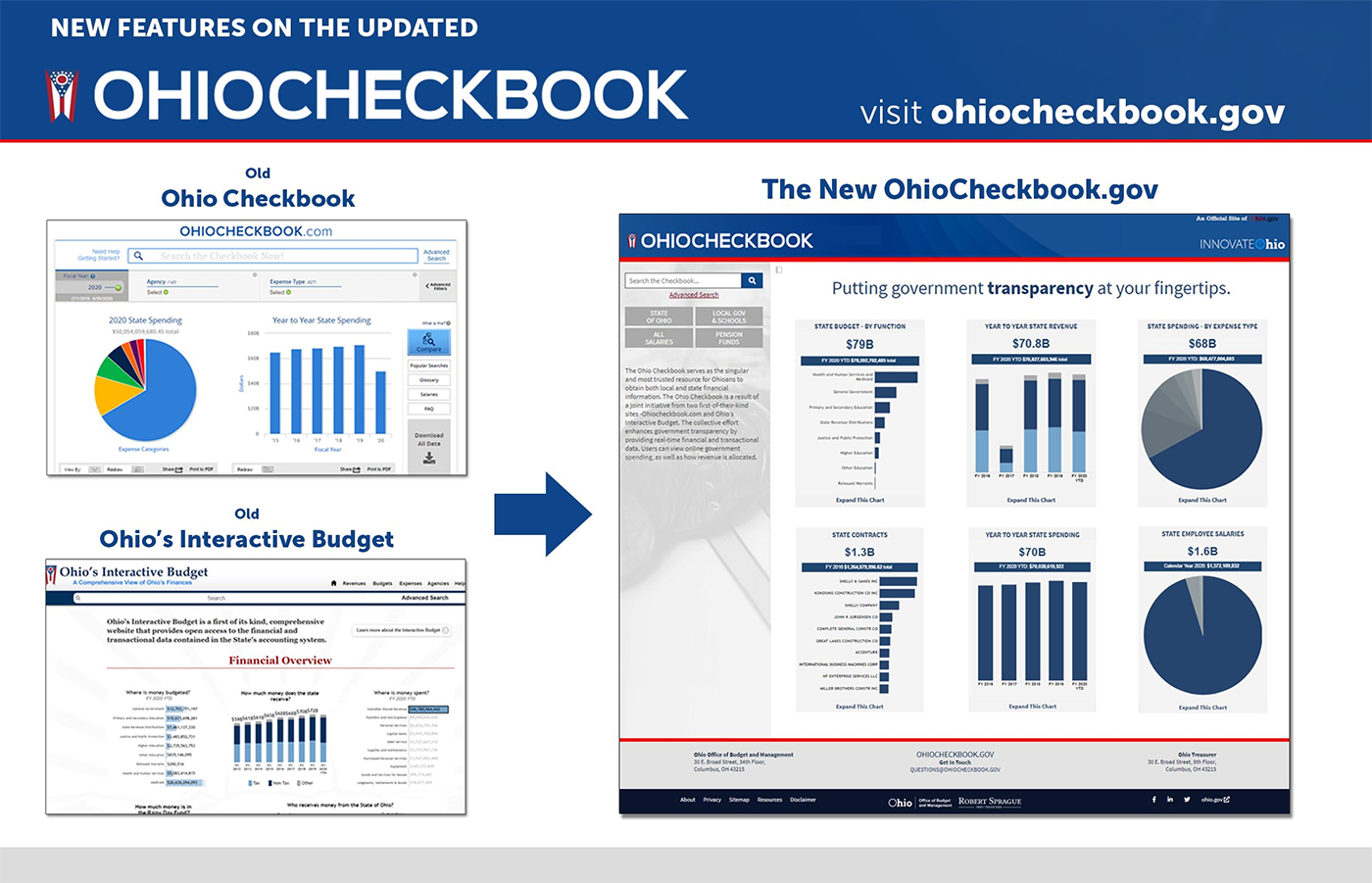 In an announcement today, Lt. Governor Jon Husted and Ohio Treasurer Robert Sprague unveiled OhioCheckbook.gov. The new transparency website combines OhioCheckbook.com (previously administered by the Treasurer’s office) and Ohio’s Interactive Budget (previously operated by the Office of Budget and Management) to create a single, one-stop resource for taxpayers hoping to learn more about spending at the state and local levels of government.

By streamlining website administration and eliminating duplication, the partnership between the DeWine-Husted Administration and Treasurer Sprague maintains the features of both sites while delivering a projected savings of around $900,000 per year.

“By working together, we’ve delivered a better, more transparent service for Ohioans and the media, while also doing it at a lower cost. Using technology and collaboration to improve customer service has been a goal of InnovateOhio and this is another positive example of how you can achieve that success,” said Lt. Governor Jon Husted.

“When government works together, it serves its people better,” said Treasurer Sprague. “We’re proud to partner with the DeWine-Husted Administration to increase government transparency while saving taxpayer dollars. This second generation of the Ohio Checkbook includes all state revenues instead of just expenditures, and now we can provide Ohioans with a complete fiscal picture of our state. The new and improved website shares more information at a lower cost and gives us a broader technology platform to ensure the future of the Ohio Checkbook.”

In November 2019, Lt. Gov. Jon Husted and Ohio Treasurer Robert Sprague announced a new collaboration to ensure the Ohio Checkbook remains a valuable and accessible resource for taxpayers in the years to come. The initiative merges and consolidates the functions and data previously hosted through OhioCheckbook.com and the Ohio Interactive Budget website, placing them under one roof.

“Ohio citizens expect and deserve transparency about government revenue and spending, and OBM is proud to collaborate with Treasurer Sprague, Lt. Gov. Husted and InnovateOhio to provide a single, comprehensive data source that is easy to use – and that is more effective and saves real taxpayer dollars,” said OBM Director Kimberly Murnieks. “We encourage all Ohioans to explore the new site to find out how your tax dollars are being used to make Ohio the best place to live, work, and raise a family.”

Day-to-day management of the new OhioCheckbook.gov will be administered in collaboration between the Ohio Treasurer’s office and the Office of Budget and Management (OBM) with the support of the Office of Information Technology (OIT).

Today’s announcement has drawn praise from several stakeholders across Ohio, including Robert Alt, President and CEO of The Buckeye Institute.

“The Buckeye Institute is proud to have pioneered public spending databases in Ohio and has worked tirelessly to increase government transparency for more than three decades,” said Alt. “Accordingly, we applaud Ohio Treasurer Robert Sprague, Lieutenant Governor Jon Husted, and the Office of Budget and Management for creating a single, easy-to-use online platform that empowers Ohioans to hold officials at all levels of government accountable for their spending decisions.”